There are people you meet who set you on certain paths – paths that you can’t (nor do you wish to) return from. John Calhoun was that way for me.

John was born with cerebral palsy. During birth, both he and his mother almost died; he suffered oxygen deprivation when the umbilical cord wrapped around his neck. At the age of five, he was committed to Oregon’s largest institution, Fairview Training Center, (originally named the Oregon Home for the Feeble Minded).

This was the 1940s – it’s what families were told by medical professionals was “best” for their family members with disabilities. Given that there was zero community services (no accommodations, no special education, no IEPs, no in-home supports), families were wholly unsupported. If you weren’t of means, how would you afford a wheelchair? Speech therapy? Augmentative devices? Would you even know these were things you needed? Across our country, hundreds of thousands of families found themselves at these crossroads. “They can help you at Fairview,” you were told. “It’s best for them. It’s best for you.”

It speaks more to where we were as a country than it does any one family. 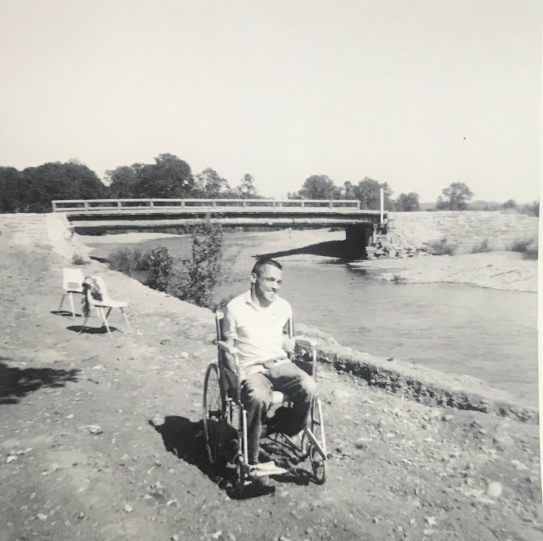 John was in his sixties when I met him: bright eyed, wild white hair. His smile was infectious – imagine Jimmy Stewart electrifying Robert Mitchum’s inner grump.

At the time, I was working for United Cerebral Palsy of Oregon. John’s support staff no-showed and I was called in at the last minute. He used a communication board and had recorded much of his life in a series of writings he shared with me. He was the first true disability activist I ever met and I was taken with him immediately. Through him, I learned much about the history of Oregon’s disability community.

In the months that followed, I began work with some friends on what would – I hoped – become a feature documentary on Fairview. We were a bunch of broke social workers and had to scale back before too long. So we did a 30 minute piece about John instead and – well, it was kind of awesome. We even gained access to the then-closed Fairview institution grounds, John our tour guide through the acreage he called home the majority of his life. In the fifteen years to follow, he sold copies of the VHS – and later, DVD – of our little video at his speaking engagements all over the country.

When John passed away in March of 2019, I had the honor of pulling together thousands of photographs and scores of pages of his writings to create a video for his celebration of life, set for early summer. For a solid six weeks, my dining room was filled with, thousands of photographs, dozens of home videos, and scores of pages of John’s writings. I spent a hundred hours, maybe more, pouring over the materials, doing what I could to bend them into a proper narrative.

In these photographs of him from the fifties and sixties and seventies – he looks like he is having the time of his life. His smile is huge. The twinkle in his eye almost cartoonish. You would never know this was a guy whose was being denied his freedom to live alongside fellow Oregonians. And as I set the photos to music, a discomfort grew.

Because this wasn’t his story. Not wholly.

I’d read his writings. We had talked for many an hour about the trauma of institutionalization and the struggle he endured to prove he didn’t have an intellectual disability, that he deserved equal rights, that he shouldn’t have had to earn his place at any table. So, these fading black and white photos and their fading Ken Burns effect  – they suggested a different reality.

I hadn’t chosen the music for the video yet. The photos – they could have easily streamed along to something like “Johnny Angel” and would have been just fine. Yet, for reasons I don’t know, Elvis Presley’s “Blue Moon” came to mind as the opening track.

The mood of that recording. It fades in with the eerie clippity-clop of a horse’s trot on a barren, open soundscape. Presley gets lost in a haunting falsetto sound that’s years beyond the nineteen he’d lived. Watching John’s black and white photos from Fairview fade in and out over the music was lovely some sideways David Lynch way, but wrong for what we were trying to accomplish.

The obvious struck me: you can’t tell John’s story without his words.

He had done the work. He had written his story. It demanded context. The essence of John Calhoun was a big smile telling you some hard truths. A man who refused to be taken down by cards he’d been dealt in a given situation. And soon, it all came together – these images transposed with the writings of a man seeking independence.

“Blue Moon” didn’t make the final cut, but the song reverberated throughout 2019 for me and I’ve played it more times than most any other.

When I last saw John, just a couple days before he died, I was at a loss for words. I small-talked, which isn’t something I do with anyone. His eyes smiled at me, at my stupid Cyndi Lauper joke fumble.

I walked out of his house with my friend Ann Coffey at my side. “I think I fucked up,” I said. “I choked.” She held me close.

But I know I didn’t get it right that day. It took the weeks that followed for me to make it up to him, to right the wrong.

I think what I shared at his celebration of life months later, I think we found a way, as a community, to illuminate him. And I hope we continue to.

John left a lot of stardust that could use some sweeping up and serving to the people. There’s a responsibility there. And I’m lucky to have been gifted it a time or two.

This site uses Akismet to reduce spam. Learn how your comment data is processed.

View all posts by anervouscomplaint